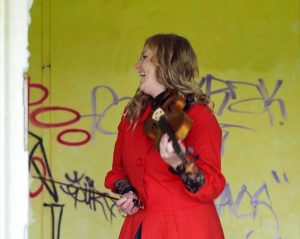 Sadie is a composer and performer based in Dorset. She is particularly well known for the socio-political aspects of her music-making with several works challenging stereotypes of marginalised peoples – refugees, Afghan women, the deaf, the homeless – celebrating their creativity and individuality with powerful expressions of musical solidarity.

She was recently Composer-in-Residence with Cuatro Puntos (USA) and Kunstler Bei Wu Sculpturepark (Germany), supported by Arts Council England International Development and PRSF Composer’s Fund Grants. She is also Composer-in-Association with the Afghanistan National Institute of Music, her symphonic work Sapida-Dam-Nau premiered by their Women’s Orchestra at the Closing Concert of the 2017 World Economic Forum, supported by a prestigious Finzi Scholarship. Her Afghan-inspired Rosegarden of Light has been used in several international films and documentaries (Australia, Kabul, USA).

Sadie’s recent commissions have included ‘..the glory of stars..’ for Tomas Klément/Czech Radio, Cantare et trepidare for the virtuoso singing violist, Katherine Clarke, Anthem for Bristol Planetarium and the Zelkova Quartet (celebrating the Moon landing’s 50th anniversary) and My Hazara People for the Orchestra of St. Johns and Charlotte Tetley (with a text by award-winning poet Shukria Rezaei). Her music is published by UYMP and Recital Music with works on the ABRSM and Trinity examination board lists. Sadie is a composition mentor with the South West Music School, a piano teacher at Shaftesbury School Dorset, tutor with New Music South West and Chair of Sound World – a new charity promoting contemporary music within education in South West England.