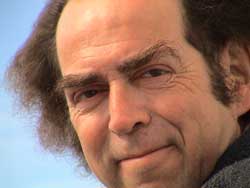 Richard was born in South Africa. At the age of 14 he went to live in Israel, graduating from the Rubin Academy of Music in Jerusalem in 1982 where he studied flute, conducting with Mendi Rodan and theory, harmony and counterpoint with Yitzhak Sadai.

After attending conducting courses in Nice and Munich (with Sergiu Celibidace) he moved to London where he continued his flute studies with Gareth Morris, was Music Director of the Electric Symphony Orchestra and lecturer in Electronic Music at the Guildhall School of Music and Drama (1989 – 1996).

Richard is a committed and ardent advocate of contemporary music and has been responsible for commissioning numerous works from living composers as well as the performance of repertoire from the 20th century to the current day. He has a special love for electroacoustic music and has composed many works for that medium.

He is passionate about providing music education for the younger generation and is currently director of SaMM, the Saturday Morning Music School in Totnes.

Richard is also a mentor for SWMS (South West Music School) and has an active music teaching practice.