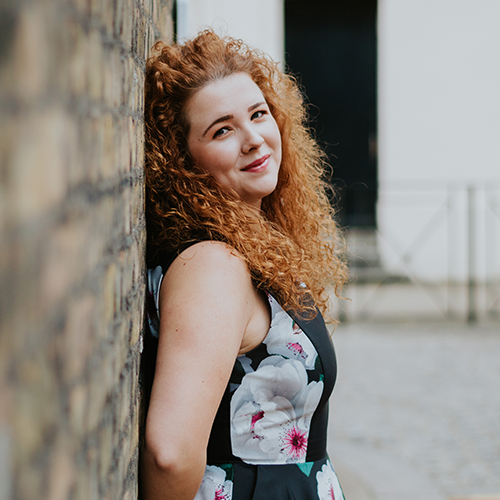 Katey Rylands is a 22-year-old English Mezzo-Soprano currently studying a Master’s degree at the prestigious Royal Academy of Music. She is currently taught by Giles Underwood and Alex Ashworth and coached by Chad Vindin. Her time at the academy started in September 2017 when she embarked on a four-year BMus degree.

Katey’s time at South West Music School really helped her gain much knowledge and confidence. Katey’s first major achievement in singing occurred back in 2012; at the age of 12 when she partook in the Diamond choir; a children’s choir that sung to the Queen for her Diamond Jubilee in St Paul’s Cathedral. This event was then the catalyst that kickstarted other young musical achievements, such as winning the May King Award at the Mid Somerset festival (2016).

Katey’s time at Wells Cathedral School as a specialist musician had a massive impact on her vocal development. Her two years at the sixth form allowed her to work with some talented musicians and tutors, such as Isobel Buchanan. Not only did she receive choral opportunities at the school but was encouraged to sing solo repertoire in concerts and lunchtime recitals. One memorable experience at Wells was the opportunity to sing operatic repertoire to the British Embassy in Kiev, Ukraine.

These precious experiences have allowed Katey to take part in the student scheme of the Philharmonia Chorus. Since joining in 2017, the chorus has given her wonderful opportunities from working with established conductors Edward Gardiner and Stephen Cleobury to singing in a masterclass led by the renowned Irish mezzo-soprano Dame Ann Murray. Her time with Ann Murray not only strengthened Katey’s passion for singing, but also allowed her to embrace her love for Baroque opera.

Katey has always had a passion for opera since a young age. Her first taste of the repertoire was when she was a child actor in Iford Opera’s production of Handel’s Susanna in Somerset.   From this point on Katey has wanted to involve herself in various operas. Being a student at the Royal Academy she has had the opportunity to explore the roles of Cherubino, Orfeo and Nancy in the Academy opera scene productions, whilst also being involved in the RAO chorus’ for Tchaikovsky’s Iolanta, Ravel’s L’enfant et les sortilèges and Massenet’s Chérubin.

Since studying a postgraduate degree at the Royal Academy of Music, Katey has excelled in being given new exciting opportunities. In November 2021 she became a member of the Josephine Baker Trust, which allows Katey to be acknowledged as an employable Oratorio artist for Choral societies around the UK. This year Katey is looking forward to performing the role of Dido in HGO’s May production of Purcell’s masterpiece Dido & Aeneas at the Cockpit Theatre, London.