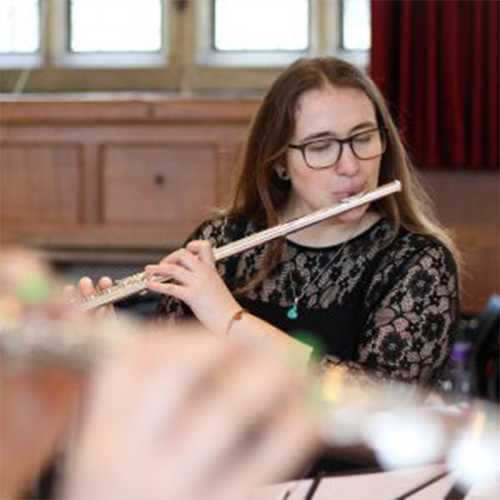 “Through SWMS I have made lifelong friends and being part of such a vibrant community of young musicians has helped me become a more creative and well-rounded musician.
I really enjoyed the residential courses that SWMS provided during my time on the core programme. They were so much fun and helped me gain confidence in myself.”
During her time with SWMS, Amy also took part in the partnership with the West of England Youth Orchestra for two years, including the 2018 South France tour.
After finishing SWMS, Amy went on to gain a First Class undergraduate degree in Music from the University of Bangor and has gained a scholarship to study a Masters in Performance.
At uni, Amy has been a part of the concert band, jazz band, new music ensemble, brass band, choir and a three-year member of the Bangor University Symphony Orchestra. She has also played in pit orchestras for 8 different musicals, performed with her flute trio at Penrhyn Castle, and had the opportunity to volunteer with a music group in North Wales for adults with disabilities. She has now started teaching woodwind as well.
Amy’s third year recital were based on the theme ’20th and 21st century women composers’, and her Masters recitals have explored folk traditions around the world as well as the influence of jazz on classical flute repertoire.