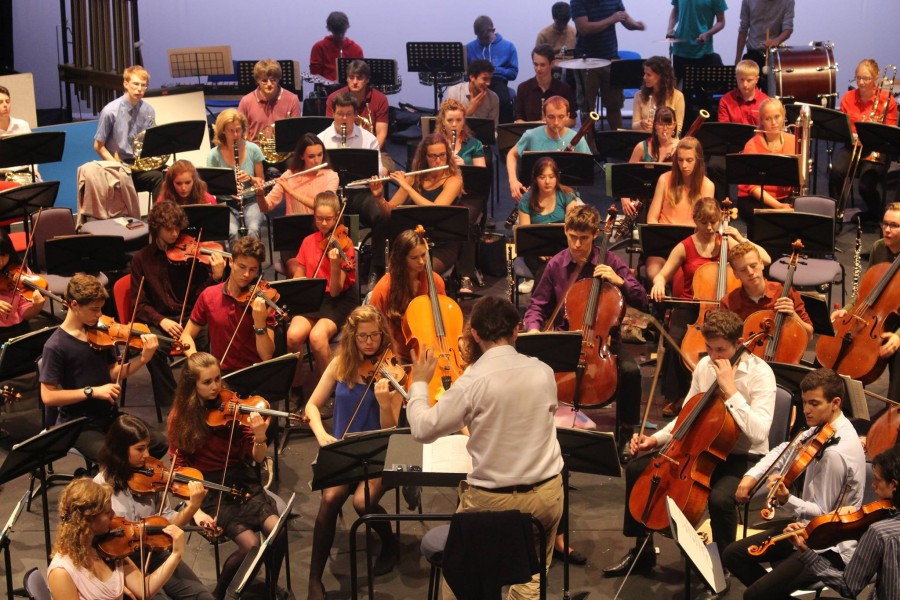 South West Youth Orchestra (SWYO) is the leading orchestra for young people in South West England, and is a residential project taking place over five days in August. Within that time, players rehearse a challenging repertoire in time for a final public performance at the end of the five days.

In 2016, we are thrilled to be running the project alongside Wells Cathedral School. Subsequently, we have access to their World-class teaching staff, who will be leading sectionals during the residential. We now have full biographies for each of the eight tutors and are delighted to be able to share them with you below!

The deadline for South West Youth Orchestra applications is this Friday 17th June. If you would like to apply, please click here for full information on the project and an application form.

1st Violin (all week): Robert Salter
Robert Salter enjoys a varied and diverse performing career. After starting violin lessons aged eleven, he won full scholarships to study at Wells, and then with David Takeno at the Guildhall School of Music and Drama, where he was a founding member of the Guildhall Strings. As Leader/Director of the Guildhall Strings throughout its 25 year existence, Robert has given concerts in the most prestigious concert halls throughout the world (Carnegie, Musikverein Vienna, Konzerthaus Berlin, Wigmore, Barbican etc), often as a soloist. The ensemble recorded extensively with both RCA Red Seal and Hyperion Records, and broadcast numerous times on radio and television both in the UK and abroad.

As a chamber musician Robert has appeared with the Nash Ensemble and Hausmusik (with whom he recorded the Schubert octet) and continues to be invited as a guest principal by the Philharmonia and Royal Opera House orchestras, and by the Academy of St Martin in the Fields, of which he is a member. Robert Salter taught for a number of years at the Junior Royal Academy of Music, and continues teaching privately and at Wells.

2nd Violin (Mon – Wed): Liz Whittam
Liz Whittam grew up in the West Country and went on to study with Jaroslav Vanecek at the Royal College of Music where she won awards for solo violin playing and chamber music. She then took up a post as Principal 1st Violin in Scottish Opera Orchestra which she held for seven years. Liz returned to London where she freelanced for several years with many orchestras including the Orchestra of the Royal Opera, English National Opera , BBC Symphony Orchestra,  Royal Philharmonic Orchestra and many smaller groups. She has also appeared as guest co-leader and Principal 2nd Violin with the City of Birmingham Symphony Symphony Orchestra.

Liz now lives in Wells with her daughter and combines violin teaching with orchestral playing and can sometimes be heard performing with the Pump Room Trio in Bath.

Viola (Mon – Wed): Ed Burns
Edward Burns studied under Mark Knight and ultimately with Yfrah Neaman, Professor of Violin at the Guildhall School of Music and Drama in London. He is a very experienced teacher and orchestral coach having been for many years a tutor for the National Children’s Orchestra and the National Schools Symphony Orchestra. He is also Senior String Tutor to the Somerset County Youth Orchestra and Senior String Lecturer at Bath Spa University.

Cello (all week): Harriet Wiltshire
Harriet studied the cello as a specialist music scholar at Wells Cathedral School, winning the string prize in her final year, and then at the Guildhall School of Music and Drama where she received a distinction for performance.

After a chamber music fellowship at the Guildhall, Harriet became principal cellist with the Southbank Sinfonia with whom she performed Walton’s cello concerto (conducted by Edward Gardner), gave the first public performance of a new work for solo cello by James Macmillan and gave a chamber concert at the Wigmore Hall. Her chamber playing has led her to play at music festivals throughout Europe, including Cheltenham, Salisbury, Warsaw, Anghiari, Innsbruck, Edinburgh, Bantry and the BBC proms.

Harriet performs with many of the London based period modern and period instrument orchestras, including the Royal Philharmonic Orchestra, the Academy of St Martin in the Fields, the Orchestra of the Age of Enlightenment and The Early Opera Company and has done education work with the Philharmonia and the orchestra of the Royal Opera House. She has performed on many live broadcasts, including BBC Radio 3’s ‘In Tune’.

Harriet has recently recorded and performed with The Enemy, Sophie Ellis–Bexter, Paloma Faith and Florence and the Machine. Harriet teaches the cello at the Godolphin and Latymer and Falkner House schools in London and is the cello coach for the National Children’s Chamber Orchestra. She also writes reviews of cello music for Music Teacher magazine.

Double Bass (Mon – Wed): David Heyes
David studied in Prague with Frantisek Posta (Czech Philharmonic), has given recitals and masterclasses in 13 countries in recent years, and has been a juror at a number of international competitions, twice as chairman. He has commissioned more than 500 works for double bass, transcribed over 200 pieces, and has premiered nine contemporary concertos with orchestras.
He received a prestigious award from the David Walter Charitable Trust of New York in recognition for his pioneering work as a soloist, teacher, publisher and commissioner of new works, and as a composer has received great success with performances in Britain, America, Spain, Turkey, Germany and Mexico in 2015.

Woodwind (all week): Ed Leaker
Edward graduated from the Royal Academy of Music with a Masters Degree in Music Performance, having studied with Richard Addison, Martin Speake and Duncan Lamont. Since then, Edward has built an enviable reputation as a freelance saxophonist and educator.

Brass (all week): Paul Denegri
Paul began his musical career as a Junior Exhibitioner at the Royal College of Music, studying trumpet with Colin Cleague (English National Opera). A move to Trinity College London saw him study the trumpet with Iaan Wilson (BBC Symphony Orchestra), John Wilbraham (BBC Symphony Orchestra) and composition with Dr Brian Blackwood. At Trinity College he was awarded the I’ll Sono di Ottone Prize for Performance twice in successive years. Following music college he performed with many orchestras, including the BBC Symphony Orchestra. He was a member of the London Festival Orchestra for six years, with whom he appeared as a soloist and also on many recordings. In 2008 he was awarded an Honorary Associate of The Royal Academy of Music London for services to, and achievement in the music profession. In 1986 he was appointed Head of Brass Jazz and Commercial Music at Wells Cathedral Specialist Music School where he remains to this day.

Percussion (Mon – Wed): Emma Arden
Emma is a recent graduate from the Royal College of Music, and is fast establishing herself as a rising talent. As well as directing the UK’s first professional drumline, Box 9 Drumline, Emma is a dedicated ensemble player and educator. She studied with Sam Walton (co-principal percussion LSO) and David Hockings (principal percussion BBCSO) and was awarded the Joy Hockings Percussion Prize during her time at the RCM. She has performed in masterclasses with renowned artists including She-e Wu, Jasmin Kolberg and Michael Burritt.

Emma performs with contemporary percussion group, Abstruckt, who regularly perform for Non-Classical events across London. Abstruckt aim to pioneer new and experimental repertoire for percussion with a particular focus on theatrical performances.

Emma has also recorded in Abbey Road Studios for Pink Floyd’s upcoming album and tour in 2016.

She is currently working towards performing with the Percussive Arts Society’s All-Star Percussion Ensemble this November at PASIC 2015. Emma is a passionate educator, and has led workshops with Creative Futures and RCM Sparks as well as performing with the BBC Symphony Family Orchestra and Shakespeare Globe Education.