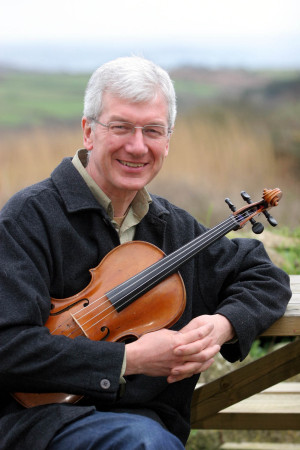 Tim Boulton learnt the most important lessons about musical language from Sandor Végh and other senior musicians at the International Musicians Seminars at Prussia Cove, Cornwall.  Drawn to the region by the beauty of the sea and granite cliffs, he and his family have been living in West Cornwall since 2003.

Before that time, Tim was based in London, performing with a number of highly respected chamber groups and chamber orchestras, including the Vellinger String Quartet, Raphael Ensemble and the award winning piano quartet Domus.  Orchestral experience includes extensive work with the English Chamber Orchestra, Academy of St. Martin-in-the-fields and Chamber Orchestra of Europe, as well as a number of period instrument orchestras.  He was a Professor at Guildhall School of Music & Drama for 17 years teaching viola and chamber music, with responsibilities which brought him onto contact with the entire string programme from junior to post graduate levels.

A natural musical communicator, inspired equally by performing, conducting and teaching, he is now committed to music education and performance in the South West of England, while still engaging in musical life further afield, often performing as guest with string quartets and chamber music groups.

In the last ten years he has established many new initiatives for young musicians in Cornwall and has developed a wealth of musical collaborations and projects with professional orchestras and chamber groups including the BBC Concert Orchestra, BBC Symphony Orchestra, Bournemouth Symphony Orchestra, International Musicians Seminars, several composers, and two art galleries.  His largest and most exciting project which he coordinated for Music For Youth saw 640 young musicians from Cornwall and the Isles of Scilly performing a specially composed new work by Joe Broughton at the 2014 Schools Prom at the Royal Albert hall – drawing together players from many different traditions including Brass Band, choral, pop, jazz, classical and street dance.

He is closely involved with the South West Music School as teacher, mentor and project leader, is Director of Cornwall Youth Orchestra and five other regular string ensembles in Cornwall, and runs the series of Concerts Penzance.