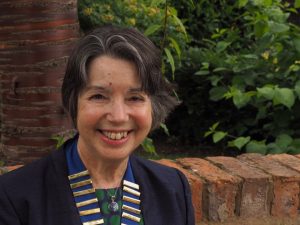 Penelope Price Jones was a scholarship holder at the Royal Academy of Music in London, studying with Marjorie Thomas, following a degree in sociology at the L.S.E.. Her performing career was mainly on the concert platform in oratorio and recital work, including BBC broadcasts and an interest in new works for voice. In 1998 Penelope was made an Associate of the Royal Academy of Music.

She teaches at her home studio in Devizes. She is a Federation of Festivals Adjudicator. In 2016 she started mentoring for the South West Music School.

She was voice mentor for the Associated Board Certificate of Teaching course mainly at the Bristol centre. She was the Teacher Training Director for the Association of Teachers of Singing before becoming Chairman of AOTOS from July 2014 – July 2016.  During which time the Association celebrated its 40th anniversary.  In 2015 she  inaugurated ‘Pathways’ for the Association, an apprenticeship scheme for aspiring singing teachers, which she continues to administrate.

In semi-retirement she has had tremendous pleasure from long distance walking and since leaving the Chairmanship of AOTOS has undertaken some study on the benefits to health and wellbeing shared by her two great passions – walking and singing.