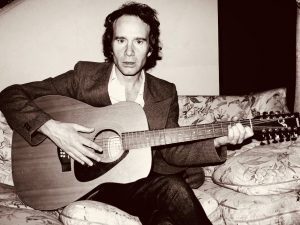 Patrick left school aged 15 and survived as a street busker for a number of years before being discovered playing on the streets by producer and multi instrumentalist Dave Francolini who said to him “ get in the car you’re going to be a pop star”. This was the beginning of the alt rock band Strangelove. Patrick and the band were signed to Parlophone EMI after only six shows. They went on to record three albums spawning a string of top forty singles. The band appeared regularly on national radio and television shows throughout the nineties. They played the pyramid stage at Glastonbury festival twice and sell out shows at the Albert Hall and Shepherd’s Bush Empire. They also experienced national and international tours as the support act to Radiohead, Suede, Manic Street Preachers and Oasis. Ed O’Brien the guitarist of Radiohead said of Strangelove “Radiohead are definitely post-Strangelove. We toured with them for ‘Pop Is Dead’ and we changed quite a lot after that. They were inspirational.”

After the band split in 1998 Patrick lived alone in a forest for two years before continuing to travel the world as a solo artist. He secured a close relationship with WOMAD festival due to an enduring friendship with artistic director Thomas Brooman. As a result of this he spent time in the black townships of Capetown studying and collaborating with Madosini, The Queen of Mpopoland. She was at that time an 81 year old an master storyteller and African musician. They then travelled the world together performing as a trio along with percussionist Vuyo Katsha. Patrick was then commissioned by Bristol City Council to write a piece on the theme of Christmas to be performed in Bristol Cathedral. The resulting ninety minute piece entitled Seven Sermons to the Dead was recorded as a double album in Salt Lake City Utah. Patrick has released seven solo albums and continues to tour to this day. Patrick has successfully and joyfully worked as a tutor for SWMS for around ten years.