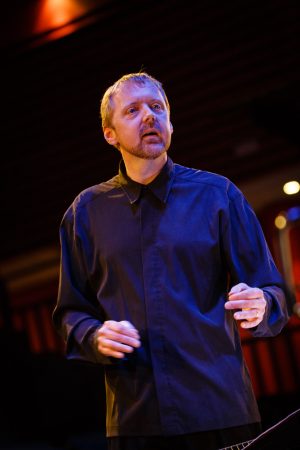 Patrick Bailey is a conductor, composer and presenter.

He has conducted concerts with the Philharmonia, Royal Philharmonic Orchestra, Britten Sinfonia, London Sinfonietta, New Music Players, ViVA, Cambridge University Music Society and many others. He has given concerts across Europe and in Dubai, India, Oman, China and the USA. In this country he has appeared at festivals in Aldeburgh, Brighton, Bath, Buxton and Cheltenham, broadcast concerts and opera for BBC Radio 3 and recorded for NMC and Tartan Film.

Whilst he was Music Director of The Opera Group, he conducted numerous new productions and tours including Blond Eckbert and The Nose (Royal Opera House), The Shops (world premiere, Bregenz Festival, Austria) and Street Scene (Young Vic & winner of the Best Musical at the Evening Standard Awards). Other notable performances include the UK premiere of Nono’s gargantuan Prometeo with the London Sinfonietta at the Royal Festival Hall.

As a composer, workshop leader and presenter, Patrick has led projects and written and presented concerts for BBC orchestras, BBC Proms, London Philharmonic Orchestra, Philharmonia Orchestra, London Sinfonietta, Royal Opera House, Trinity-Laban Conservatoire of Music and Dance, Bournemouth Symphony Orchestra and Music for Youth.  He held the roles of Learning Manager for the BBC Concert Orchestra and Education & Community Director of the London Philharmonic Orchestra. He was appointed a Bournemouth Symphony Orchestra Associate in 2015 leading their participation work in Cornwall where he now lives. He is the founder and Artistic Director of Kevos, a group of Cornwall-based musicians dedicated to performing contemporary music. He continues to divide his time between Cornwall and working across the UK.