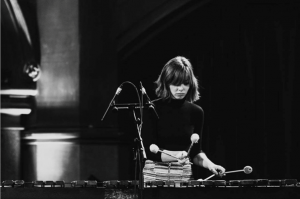 Originally from Devon, Harriet studied Orchestral Percussion at the Royal Welsh College of Music and Drama. She has experience in a range of genres from jazz-funk band Tezeta to orchestral playing with BBC NOW, studying gamelan in Bali to contemporary opera with Operasonic. Harriet performs regularly with Spindle Ensemble, an alternative, contemporary classical group supported by Adderwell Music. Their debut album, entitled Bea, was pressed to vinyl and released November 2017. Harriet works in a number of dance and theatre projects playing solo percussion, most recently for children theatre company Can’t Sit Still. Their show, Plink & Boo, toured the UK Autumn 2018 and Spring 2019. Harriet has also recently performed with the Paraorchestra + Friends on their Richard Feynman inspired dance collaboration called The Nature of Why. Devised for the stage of the Bristol Old Vic, it recently sold out the QEH at the Southbank as part of Unlimited festival and went to Perth Festival, Australia in Feb 2019. She is now the composer and musician for projects such as Thimble Theatre and Cyrimba and has been working freelance in Bristol since she graduated in 2014. Harriet has been a mentor for South West Music School since 2018.