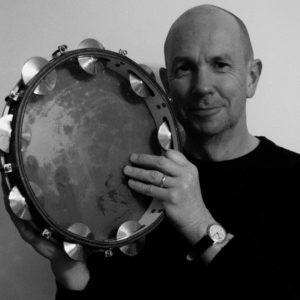 In 1985, after taking an interest in African music and encountering The London School of Samba at the WOMAD festival, Colin set up Inner Sense Percussion Orchestra to perform at venues, carnivals and festivals throughout the UK and Europe. He visited Brazil a few times, playing in the Rio Carnival with Escola de Samba GRES Tradicao in 1994 – an unforgettable experience playing with 500 drummers in a 3500-strong explosion of colour and rhythm.

Also in 1994, Inner Sense collaborated with Cornwall’s Kneehigh Theatre on a unique, wordless and carnival-styled version of Bizet’s Carmen. The same year, Colin moved to Cornwall and continued to work as Kneehigh’s musical director until 2000.

Kneehigh introduced Colin to story teller, Dr Vayu Naidu for a one-off performance of The Ramayana entitled Nine Nights which was the beginning of a long and continuing collaboration, including a performance at London’s Barbican Theatre supporting India’s legendary classical flautist, Hariprasad Chaurasia. Colin has also played prestigious shows with Dr Naidu in London, Copenhagen and Manchester and they are currently collaborating remotely during lockdown on new material.

In 1995 Colin reunited with Biting Tongues’ Graham Massey in 808 State, performing in America, Europe and Brazil alongside Bjork, George Clinton and Herbie Hancock.

Colin continued to run percussion workshops with various samba bands and taught at The Hub Theatre School from 1995 until 2001 developing a skill set that prepared him to set up the music department at City College Plymouth where he has been teaching since 2001, setting up music courses ranging from level 2 Diplomas to level 6 BA (Hons).