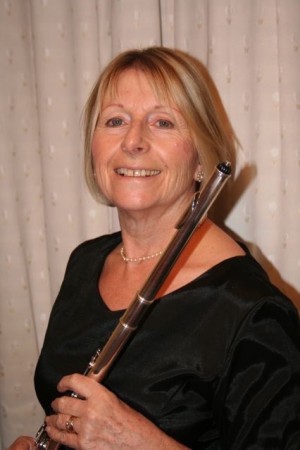 Carole Jenner-Timms studied at the Royal College of Music with Christopher Hyde-Smith for three years. Since leaving the RCM in 1970, Carole has played and taught the flute extensively in the South West and directed “Flutes Galore” for twenty years. She has worked with many choral societies, operatic companies and orchestras including the London Mozart Players, the Academy of the BBC, the Royal Ballet, Travelling Opera, Gilbert and Sullivan For All and the Philharmonia of Bristol.

From 1990 she worked for the Avon Music Service as Deputy Head of Woodwind and an Area Team Leader and was the Head of the Bath and North East Somerset Music Service from 1996 until 2008. Carole returned to teaching the flute at Wells Cathedral School from 2009 until 2014.

Carole was the Flute Specialist contributor for the Boosey Woodwind Method published in 2001, compiled the GSMD Flute Syllabus Grades 1-5 for the 2002-2006 Guildhall Syllabus and was a Chapter Author for the ABRSM’s award winning publication “All Together” in 2004. She has had several articles recently published in British and Australian music magazines.

Carole has been a mentor for the ABRSM, the KS2 Music CPD Programme and Music Mark’s leadership and management course and was a Music Service Evaluation Partner from 2007-2011. She is currently a mentor for and the South West Music School and is a Quality Assessor for the Certificate for Music Educators Trinity College. Carole was the Chairperson of the British Flute Society from 2011-2015 and was elected to the Royal Society of Musicians in 2013.